My name is Toni Van Loan, and I have been in the piano business since 1982. I got started in the 1970’s when I had the misfortune to graduate from the Manhattan School of Music in the middle of a recession. I had acquired a beat-up Hardman grand from one of my MSM teachers, and I wanted to fix it up so I could really have a decent piano to play. I started out with a course in basic piano tuning at Teacher’s College [Columbia U] taught by a Steinway tuner , and progressed to part-time apprenticeship with a couple of old-line European rebuilders. These gentlemen taught by example rather than intent, but I managed to rebuild the piano successfully.

This Hardman had been manufactured on West 43rd St back in 1906, and was the beginning of a long involvement – even a romance with, vintage piano restoration and rebuilding. I ran an ad in the “Village Voice” a popular weekly paper at the time, headlined “Old Uprights My Specialty”. I had found that many piano techs didn’t want to touch these common and popular pre-WW2 pianos, so, with my bits of hard-earned knowledge and attention to detail I was able to give many of these instruments new life.

My association with Steinway came about by accident. I had bought an antique Steinway upright from a deceased bar on Houston St near the Bowery, which I had rebuilt, with new strings and hammers, and then sold to a dear friend in Canada. I needed a letter from Steinway stating that the piano was an official “antique” [over 100 years old] so that my friend would not have to pay duty on it. 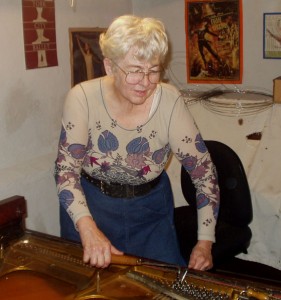 Lo and behold, much to my surprise, I was referred to a man I had gone to MSM with, Phil Palette. Other than providing me with the necessary letter, he recruited me to tune Steinways in uptown Manhattan and the Bronx [their previous tuner had been mugged]. Marlene Saltzman, who was head of Repair at that time, used to send me out to do appraisals on old Steinways, and sometimes troubleshoot and even repair current model pianos.

This led to my being introduced to quite a few 19th century pianos that were ripe for restoration, not just Steinways, but other makes as well. These extremely old pianos had their own set of problems. Untunability on account of bad pinblocks and aged piano wire was common, as was unavailability of action parts, but ivory key repair and restoration became one of my most popular jobs. I spent the last decade of the 20th century honing my skills at vintage piano refurbishment—-. I think of it as a craft in the Medieval craft guild sense.